How I record in the studio

I have been known to drone on about how I like recording live, because I think you get a better feel that way. Anyway, proof of the process is in the video – part of a song called Pinch of Salt – I don’t usually write political songs but this one just came out after I had read another piece of drivel published by The Daily Mail! I got somewhat carried away with the sleeve notes. Here they are:

Nations and peoples have fought tooth and nail for about forever. History is a bloody business full of intrigue, war and enslavement. This century has seen the pressure ramped up – East pitted against West…again! When, in fact, we are all children of Mother Earth or God depending on your belief system. We should therefore love one another… nourish and sustain one another. The chief culprit in maintaining our paranoia is the news. The old adage, ‘Don’t believe what you read in the papers’, is true. Political news is designed to maintain a state of fear, foster suspicion, and the inclination to create enemies where none exist. It’s a tissue of lies, fake… a monumental distraction and deception. The idea of demonising nations and peoples because they don’t happen to share your beliefs is flawed and contrary to the law of God, Jesus, Mohammed, Buddha, and what all the enlightened thinkers through the ages have told us. Today, the mass media is a devil’s brew of lies, owned by political masters, designed to sow seeds of mistrust, mayhem and misrule.

Pinch Of Salt is gritty, angry rock, ranting, wailing and railing against an evil king and all his servants. Plus a little homage to Kurt Kobain! The song is from my new EP, When The Girls Come Out To Play, only available at Musicoin. 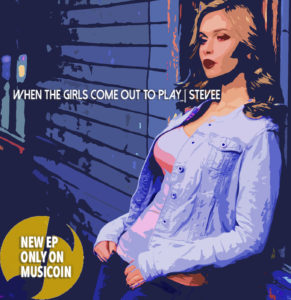